Do Tarot Cards Tell the Future? 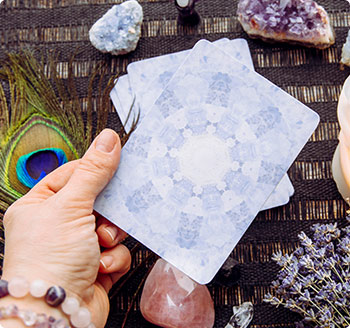 Have you ever heard someone say anything like, “I’m too afraid to have my cards read. Tarot cards have the ability to predict the future! They might say something I don’t want to hear as if something horrible is about to happen!”

We certainly have. Perhaps you’ve even considered it yourself, even if you’re not familiar with Tarot.

People who believe this are missing out on one of the most powerful tools accessible to us as intuitive beings: The Tarot. And, rather than seeing themselves as forerunners of the future, they are becoming victims of it.

In this blog, we debunk the notion that Tarot can accurately predict the future. Instead, we’ll teach you how Tarot can help you by showing you what might happen and how to get the results you want.

One of the most common misunderstandings about the Tarot is that it can predict the future. Whatever happens, the cards will tell you exactly what will happen.

For example, the cards may indicate that your long-term relationship will end abruptly, or that a work offer will be cancelled at the last minute, leaving you jobless for years. Worse yet, there isn’t anything you can do about it.

It’s no surprise that many people are terrified of having their cards read. Some even believe that if these things are shown in the cards, they will manifest regardless of what happens, thus it’s best not to consult the cards at all to avoid terrible things happening.

The problem is that these ideas presume that you have no free will as a human being and that the future is predetermined. Your fate has already been chosen for you, down to the smallest detail, regardless of what action you choose.

Does that make sense to you? It certainly doesn’t for us at all.

What the Tarot really tells you

What does the Tarot tell you if it doesn’t tell you the future?

Here’s what we believe…

Tarot won’t tell you everything that will happen in your life, such as what will happen at work, the precise date you’ll meet your future husband, or the first name of your first child (so don’t ask!).

However, depending on your current circumstances, it can forecast what might happen. It can also show you what steps you need to take right now to achieve your long-term objectives.

Let’s say you want to have a happy relationship with your partner, but the Tarot cards predict that you’ll have a fight soon. You have a decision to make. You could give up right then and terminate the relationship in preparation of these looming conflicts, believing that they will occur regardless of what you do.

Or you could say, “You know what? I despise debates. What could I do to avoid or lessen the impact of the disagreements?”

If you pull a few more Tarot cards or do some internal work, you’ll find the answer. If you utilize such strategies, you’ll be able to avoid negative results.

Does this imply that there will be no debates? Perhaps, but perhaps not. The key thing is that you’ve taken action now to reduce the likelihood of a negative outcome later.

Be the creator of your future, not the victim

We know which one we would choose!

If you’re ready to say “Yes” to empowerment when reading the Tarot, then just follow these simple steps:

Tarot will not write your destiny for you; it is all up to you. And isn’t that a lovely thing?